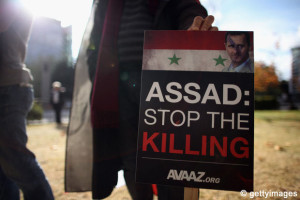 LONDON, ENGLAND – OCTOBER 29: Syrian protesters make their way down Edgeware Road to the Syrian Embassy on October 29, 2011 in London, England. Amnesty International activists and Syrians living in the UK are to hold a ‚No More Blood – No More Fear‘ rally outside the Syrian embassy to call for an end to the government crackdown in Syria, which has killed at least 3,000 people. (Photo by Dan Kitwood/Getty Images)